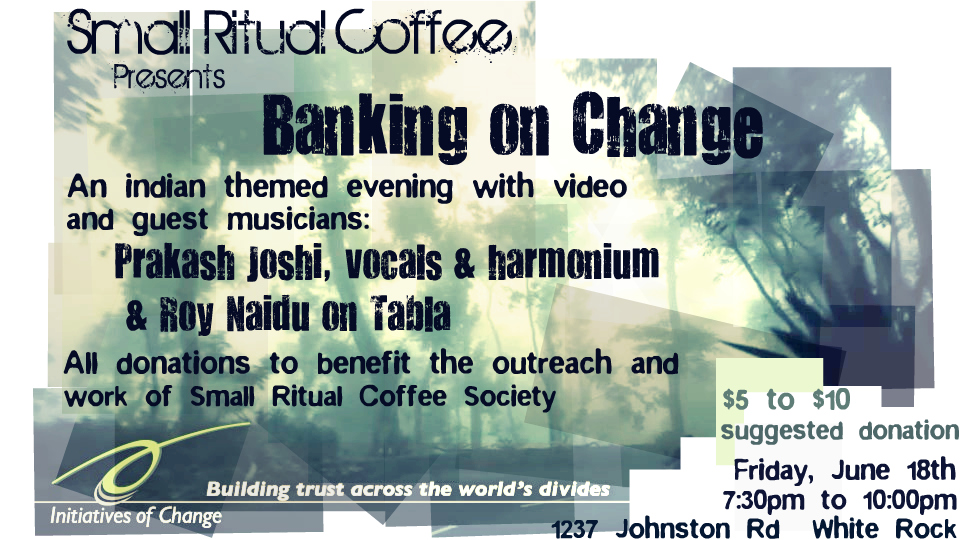 On Friday the 18th June, from 7:30-10:00pm,Â Small Ritual Coffee Society, in association with Initiatives of Change, presents an Indian themed eveningÂ with the showing of an award winning short documentary, Banking on Change.Â Music will be performed by guest musicianÂ Prakash Joshi and Roy Naidu. Â Admission is by donation ($5 – 10 suggested). All proceeds go to supporting the work and outreachÂ of Small Ritual Coffee Society.

Two-thirds of India’s 1.2 billion people live in the nation’s 600,000 villages. Despite India’s economic growth, the disparities between wealth and poverty are enormous. Many villagers migrate to the cities in search of work and are forced to borrow from private money lenders at very high interest rates. Once they begin to borrow, they rarely get free.

An encounter with Initiatives of Change as a University student changed the course of J S Parthiban’s life. The South Indian bank manager set out to challenge the system and bring about change for those who need it most. He encouraged beggars to open bank accounts in New Delhi, and pioneered micro-loans to villagers in his home state of Tamil Nadu. This film tells his story–and theirs.

I feel this film has great relevance here in North America as an antidote and challenge to the recent crisis of confidence we have seen in our financial institutions. The 12-minute video produced by Andrew Hinton of Pilgrim Films for IofC India is a testament to what one person can do to bring change where they live and work.