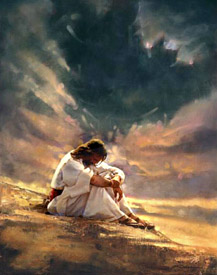 In the Wilderness - Ron DiCianni

If Jesus was–as Christians believe –both fully man and fully God, he too had to battle with the false self… M. Basil Pennington, in his book True Self/False Self ( New York: Crossroad, 2000), pg 31, suggests that the well- known account of the temptation of Jesus in the wilderness is best understood as his struggle with three major potential false selves.

After forty days of fasting, Jesus would have been ravenous. The first attempted seduction of the tempter was to turn stones into bread–a temptation to power. But Jesus said no to the invitation to establish his identity on the basis of his doing, particularly doing something that was independent of submission to the authority of God, Jesus had, Pennington notes, “ a better food”–the Word of God (Matthew 4:4).

Then the tempter invited him to throw himself from the top of the temple into the crowds below, so they would immediately recognize him as the Messiah. Again Jesus rejected the temptation. He chose not to base his identity on prestige.

And in so doing he took a further step to anchor his identity in the Father, not in what people thought of him.

Finally, the tempter offered him all the kingdoms of the world. But once again Jesus rejected the offer, refusing to find his identity in possessions. He knew himself in terms of poverty of spirit and the loving will of the Father. He knew, therefore, that power was a poor substitute for this.

Jesus know how who he was in God. He could therefore resist temptations to live out of a false center based on power, prestige or possessions. By resisting these false ways of being Jesus was moving toward an identity grounded in his relationship to the Father–an identity in which his calling became obvious as he came to understand who he really was.

Every moment of every day of our life God wanders in our inner garden, seeking our companionship. The reason God can’t find us is that we are hiding in the bushes of our false self. God’s call to us in gentle and persistent: “Where are you? Why are you hiding?”

The more we identify with our psychologically and socially constructed self, the more deeply we hide from God, ourselves and others. But because of the illusory nature of the false self, most of the time we are not aware that we are hiding. Coming out of hiding requires that we embrace the vulnerabilities that first sent us scurrying for cover. As long as we try to pretend that things are not as they are, we choose falsity.

We all tend to fashion a god who fits our falsity… Having first created a self in the image of our own making, we then set out to create the sort of a god who might in fact create us. Such is the perversity of the false self.

Coming out of hiding is accepting God on God’s own terms. Doing so in the only route to truly being our unique self-in-Christ. If this is your desire during this season of Lent take some time ( my words) to do two things.

First, ask God to help you to see what makes you feel most vulnerable and most like running for cover. Allow yourself to feel the distress that would be present if you did not avoid these things. Then, listening to God’s invitation to come out of the bushes in which you are hiding, step out and allow God to embrace you just as you are.

Second, prayerfully reflect on the image of your self to which you are most attached. Consider how you like to think about yourself, what you are most proud of about yourself. Ask God to help you see the ways you use these things to defend against feelings of vulnerability. And then ask God to prepare you to trust enough to let go of these fig leaves of your personal style.

There is an alternative to the false self. And it takes less energy and work. The way of being that is based on our life in Christ is a way of truth that leads to our vocation and to our deepest possible fulfillment.