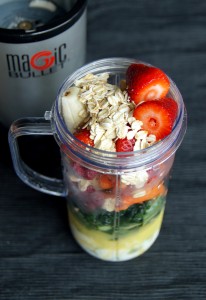 I was standing in the kitchen, holding my phone when it began vibrating in my hand, making odd whirring sounds, then it coughed out a singular, loud, chirp. When I opened it, all my contacts had disappeared. HMMM.

“I’ve never seen anything like this before.” said Mr Bell Man, shaking his head. “It must be malware.” I went home and started an online chat with Apple Support. After six hours of chatting and innumerable disconnects, the problem was resolved. At 1 am, I crawled into bed, feeling weary but strangely triumphant. “I DID IT!”, I thought to myself. “ I SOLVED A GNARLY TECHNICAL PROBLEM WITHOUT CALLING DANNY FOR HELP!!!

The next morning I overslept and woke up feel tired, my head stuffed with a head cold. “Adam, Johanna, time to get up! We are running late!” OH WELL – 20 Minutes to departure.

Five minutes to departure, I’m firing kale, strawberries, bananas, yogurt, milk into a bullet capsule to make smoothies. I screw on the blade, stick the capsule in its base, push the button, and walk away to pack my things. 2 minutes later I return. Smoothie is oozing – out the bottom of the capsule, into the electrical components of the machine, down the sides, onto the countertop. DARN.

I detach the capsule. The automatic shut off fails, the motor continues turning, smoothie now begins spraying over my new shirt, the backsplash, the cabinets. DAMN!

Adam walks into kitchen, “Mom – something weird is happening to the toilet!”
“Get behind me Satan!” I cry out, half joking.
The toilet stops.
“That is so weird….”, Adam says.

1 minute to departure: “Shoot! I forgot to let the dogs out, and I’ll be gone all day! Samba, Gracie, Katuah – go outside. Wait. Where is Samba. Samba?” I frantically search the house. “Adam, Samba’s missing – go outside and see if you can find him!!” Samba is my parent’s Shih Tzu . He fits under our fence. Great. The day my parents return, and I’ve lost their deaf, blind dog.

5 minutes after the supposed time of departure. Adam returns – no Samba. We look one more time around house. There he is, curled up quietly on a blanket under Johanna’s bed.

7 Min after time of departure. I rush out the door and slam into the smell of mushroom manure, our neighbors latest enterprise. “#%$?#**#!!!“, I mutter under my breathe. Ah. the Wilderness of First World Problems. Scarcity can take many forms.

But there, in the midst of the barrenness, was also abundance. I walk out the door and there are Jared and Zoe, clothed in fog, waiting by the car, Jared’s funny little hat sticking up against the white backdrop.
“I hate that smell”, says, Zoe. “Makes me want to puke.”
“I hate it too, Zoe. Makes me want to mutter curse words.”
She looks at me with amazement,
we both break out laughing.

As we drive, I tell them the story of my morning. I drop them off at school, and head on over to church. I see against the wall the shadow of a dried blossom. It was the first object I photographed when I began my Instagram challenge many months ago. I took out my newly restored phone and take another picture of it.

It really is all about perspective, I think. There is beauty. There is ugliness. Which will I hypervigilantly scan the world to see?

At 9, I meet Brent and Sarah for my annual review at Michaels’. We talk about Southpoint: the good things, the hard things, the as-yet-to-be developed things. Most importantly, we talk about the tiny, almost unnoticeable slices of God’s goodness that are unfolding in our church. Sarah mentions the way Klein’s enjoyment of church was renewed when he helped Johanna run the powerpoint. Brent talks of authors he’s been exploring who open a broader theological landscape. I talk about Katie Wood, and the letter I’d received about our little church and how much it meant to her. There is is again – abundance in the midst of scarcity.

In the midst of the social fatigue, the frustration with technology, the rapid pace of change, the theological convulsions happening within Christendom, in the midst of the bombing of Aleppo by Russia and the bombing of Afrin by Turkey and the cutting off of heads by ISIS, there is a boy with a wide faced smile, silhouetted against the fog, and a plant stalk, dried, yet holding within its withered body the seeds of next summer’s glory, and there is a little church with a budget in the red and microphones that never quite work a church that holds her family in the arc of an embrace within this family of Jesus angels come and minister to us and wild animals visit us here.

Richard Rohr writes, “…we can indeed be happy in mutual interdependence with nature, with the kindness of others, and with our own hard work and creativity.” To use his words, “simplicity and a worldview of enoughness”, provide an “alternative orthodoxy” to those of us in the first world, caught as we are in the bondage to production and consumption, the bondage of scarcity in our abundance. This Lent, may we find the rich abundance awaiting us in scarcity.

Feb 21 – ALL OUT: Pot-luck house church breakfast
Sunnyside will be having its AGM this morning, so the sanctuary will not be available to us. Instead of gathering at Sunnyside, sign up to be a part of a small group pot luck breakfast and we’ll place you in a home. Happy to host? Want to join us? Let Anne know ASAP.