The Church at Southpoint
No Comments 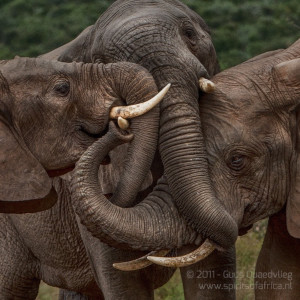 Up Close and Personal
Recently I read The Elephant Whisperer, the story of Lawrence Anderson and his decision to accept a herd of “rogue” wild elephants onto his reserve in Zululand. The elephants, too destructive and dangerous in their former reserve, were going to be put down; so, in one last-ditch effort to save them, he said “yes” to the risky venture. To help these elephants trust humans again and thrive in their new home, he had to get up close and personal, sleeping 24/7 near them, watching their patterns of interaction, building trust slowly over time. As his relationship with these giant beasts grew, he realized that while previously he had known of elephants, he had not really known elephants – not the full breadth of their intelligence, their capacity for nurture, and the powerful, nonverbal ways they communicated with one another. He noticed they had an ability to communicate with one another over vast distances and even revealed an awareness of his comings and goings even when he was not physically present. Through these sometimes frightening, sometimes beautiful, encounters with the herd, a strange friendship grew between them.
His story reminded me of the mysterious dynamics within the human/divine relationship. We can have a rough idea about God, but if we want to know God intimately, we will have to radically give ourselves over to knowing and being known. This process takes great attentiveness, an openness to new revelation, compassionate listening, large swaths of time spent waiting and watching, curiosity, and a willingness to risk.
I would like to invite you into this kind of curious attentiveness during the next three weeks as we encounter the Risen Christ in the gospel texts. I invite you to sit beside these texts, watching Jesus much like Lawrence Anderson watched the elephants, paying close attention to his words, his movements, his actions, the places he shows up, and the people to whom he reveals himself. Carry these passages around with you during the week: watching, listening, and waiting for what they might have to teach you. Pay attention to the way Jesus engages individuals, and then watch closely to see how the Risen Christ is encountering you.
– Pastor Anne Smith

News from Sunnyside
On Sunday, 18 June the three UCC churches, including Sunnyside, will become one congregation, which they’ve been steering towards for some time. (That day Sunnyside would like to have the church for the entire morning – so we’ll be meeting in Gathering Groups.). This summer, as one congregation, they will continue rotating between the three church buildings, but by September they will be meeting regularly in the largest church, in Crescent Beach.
What does this mean for Southpoint?
The Sunnyside church building will be retained and used for services (one in the afternoon) and events during the week, so the building will still be a part of the extended body life of the one church. Kind of like the Trinity: one church, three buildings! We will continue as valued renters and can move our service to an earlier time, with longer to set up, and longer to linger. We’ll be intentional about seeking feedback from Southpointers about our hopes and ideas, in due course.

Up Close and Personal Sermon Series

28 May – ALL OUT  Meet in Gathering Groups rather than at Sunnyside.

18 June – ALL OUT  Meet in Gathering Groups rather than at Sunnyside. (Also Father’s Day!)

Prayers
Please pray for Kate M. this week, whose car was hit side-on by an elderly driver and who is bumped and bruised. Remember Anne H., too, as she journeys with concussion symptoms from a car accident in March.

Camping with your Southpoint Family Friday, 30 June – Monday, 3 July. We have the Group Camping Site reserved at Hazelmere! Come for the weekend, or just for an evening. Contact Anne for details.

Gleaners ‘bee’ near Vernon, BC. Sunday 27 to Thursday 31 August