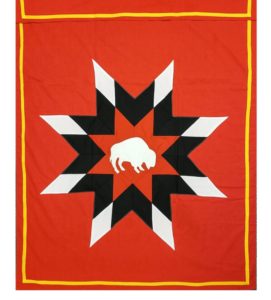 Symbol of Change | MMIWG
– Darlene Clarke
The star blanket [was] made and donated by Darlene Clarke (First Nation – Peguis Band) in memory of her sister. The background of the wall hanging is red, representing the families that have been affected. The white buffalo found at the centre of the quilt is a symbol of change.

Buried in the book of 2 Samuel is the story of Rizpah. Hers is a story of grief, the unraveling of a mother’s heart at the violent deaths of her sons, and her refusal to let things go back to normal until some semblance of justice had been done.

Rizbah was King Saul’s concubine. She bore two sons into the world. When David became king, he offered her sons to the Gibeonites as retributive justice for killings Saul had committed against their people. Along with five of Saul’s grandsons, Rizbah’s sons were killed and their bodies left to rot on a mountainside. Rizbah, however, refused to leave their bodies. She camped out on the mountainside with the bodies for five months, fighting away the birds by day and the wild animals by night, until finally David was moved by her actions and gave her sons’ remains a proper burial.

Rizpa’s grief was unapologetic, raw, and persistent. She refused to leave her son’s bodies until they had been given a proper burial. Where do you see the grief, courage, and active resistance showing up in our world today?

Austin Channing Brown, a leader for racial justice, sees Rizpah as an icon for black dignity:
“I cannot get the image of Rizpah out of my head. Rizpah lost a son to state sanctioned violence. She wouldn’t let the violence be forgotten. She wouldn’t let it be swept under the rug. She led a protest of one, fighting off beasts to bring what measure of dignity for the bodies and indictment for the rulers that was in her power to do. The Word says that she took her sackcloth and made a tent out of it. Her tool for mourning became the shelter under which she led her ferocious vigil. I’m not here to tell you what to do with your sackcloth. You may need to just wear it, tear it, yell about it, scream and wail. That’s okay. Some may need to use it – putting your rage into organization or donations or writing, or even tweeting – something, anything to speak. It seems Rizpah was on that mountain alone. But you are not. You are not alone. You are not alone. Your body matters. Your life matters.”

This refusal to let things return to normal when someone or something has been violated takes great strength. Rizpah refused to accept what was dehumanizing to her sons, and by her refusal, she was re-humanized; so were her sons. I see her determination in Ruth Bader Ginsburg, whose life we honour this week. I see it in the Truth and Reconciliation Commission, and in the National Inquiry into Missing and Murdered Indigenous Women and Girls.

How might you lean into your own grief over what is dehumanizing this generation?

Join those of us who will ‘attend’ Dr. David Gushee’s presentation from his home in Atlanta, Georgia to the Gathering of Baptists in Ontario. He is the author of Changing Our Minds: A Call for Full Inclusion, an insightful book on the place of LGBTQ+ Christians in the church. More information.

Are you a regular and not in a Gathering?

If you would like to join us for either Zoom or an Outdoor Church service, please contact Karin (email) for more information.

Prayer Chain
If you have a confidential prayer need, please contact John.

Supporting the Work of Southpoint

Thank you for considering your giving during this unusual time. Options include:

– via Pre-authorized debit (repeating or one-time) with this form (link). Cost to Southpoint is only $0.50.

– via Paypal to The Church at Southpoint. Cost is 3% of the donation.

– via Charitable Impact Foundation. Cost is 2.8% of the donation.