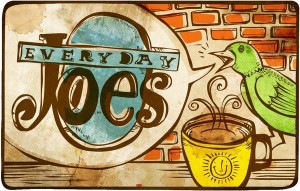 In all my coffee house exploring and investigating, I was fortunate enough to come across some wonderful people at a place called Everyday Joe’s in Ft. Collins, CO. (check out some pictures)

In their own words, “If you want the long story I have to begin by talking about a church whose name was Joshua’s Crossing. It was a church started back in the “GenX” movement that churches went through in the late 90s. Joshua’s was a church plant of Timberline Church, which started in 1999.

Joshua’s Crossing began as a church that met in night clubs around town. Over time the church evolved and needed a permanent building. In 2002 a building on Mason Street was discovered. For years it had been Operation Electric. An appliance warehouse and service center. Through a lot of hard work and time the space at 144 S. Mason was transformed into a church. Exposed brick and high ceilings gave the space a lot of character. The church met Sunday nights. The rest of the week the space sat empty, dark, and cold.

The man who started Joshua’s Crossing, Paul, always had an idea about a church. Paul dreamed of building a church that “smelled like a coffeehouse (inviting), sounded like a concert (quality), and felt like an opera (passionate).” So it was natural for the church to use the space as a coffee shop six days a week. It was a vision of a church as a servant to the community through the relevant cultural offering that a modern coffee house provides. And that is the seeds of Everyday Joe’s.”

I wish that you all could experience what I did.Â  This was not just any retail space.Â  There are a lot of coffee shops in Ft. Collins (I went to many of them), but Everyday Joe’s had something very unique.Â  I had difficulty putting my finger on it at first, but the place is alive!Â  Very few places I have every been have shared this quality.Â  There was something palpable in the atmosphere.Â  Maybe it was a long day of traveling, lack of sleep, or the promise of hot rich caffeinated beverages, but I very much wanted to be there.Â  I wanted to spend hours there and indeed did so.Â  If you think that coffee shops have to look and feel like Starbucks, Tim Horton’s, or the Wired Monk then get ready to be surprised.

Everyday Joe’s is a fantastic example of people with a passion to serve and heart for their community.Â  They operate non-profit and amazingly are staffed by volunteers.Â  With the exception of the 2 co-directors, nobody is paid to work at Everyday Joe’s.Â  While I was having a conversation with one of the directors, he was approached by at least four people asking if they could volunteer for a shifts and if there was space available on the new schedule.Â  People just love being there.

It hasn’t always been an easy road for Everyday Joe’s and being run by a church comes with its own set of unique challenges.Â  Some people in the community feel that they are too religious, some people feel that they aren’t religious enough.Â  This sometimes uncomfortable and tenuous position is according to senior pastor Darren Fred, “exactly where Jesus would have been…”Â  He shared a wonderful story with me that communicates so much about Everyday Joe’s and the relationships that develop there.Â  Not all of their volunteers go to church at Everyday Joe’s (though many do), in fact not all their volunteers are even Christians (perish the thought…).Â  One such volunteer came to Everyday Joe’s through a rather unusual way.Â  Everyday she would ride by the coffeehouse, and everyday she would think to herself that Everyday Joe’s was a place that she would never go.Â  She had never been inside, nor knew anyone who volunteered there, but she had “heard” about that place, and was convinced it wasn’t a place for her.Â  One very hot day, while riding her bike home, she was desperately thirsty and tired.Â  The only place that was nearby and open was Everyday Joe’s, and so she stopped in.Â  She didn’t have any money, but that wasn’t a problem (at Everyday Joe’s if can’t pay, you are still important).Â  What started out as a brief stop to escape the heat and quench some thirst, continued on for hours and hours as she talked with one of the volunteers who was working that shift.Â  To anyone’s knowledge, she never said the sinner’s prayer or committed her life to follow Jesus, but she has been volunteering at Everyday Joe’s for over 3 years.Â  In turn, she brought a friend to Everyday Joe’s (who similarly had no desire to ever step foot in there) who now volunteers regularly as well.

Being in Ft. Collins really gave me a chance to think and reflect on what we are trying create.Â  Is it just another place to get coffee and baked goods?Â  Of course its not, we have no need for that.Â  We are trying to create a place that is different.Â  Not just defined by a different style of business practice, but by a different kind of spirit.Â  We have the opportunity to really engage with our community in such a way that is unique, intriguing, and relevant.Â  There are so many wonderful things that can grow out of this coffeehouse project, I hope and pray that you will be imagining what it might be like, and how you can be involved.

Sounds great! Could you post on this web site the upcoming list of dates that you mentioned at church today? See you soon!