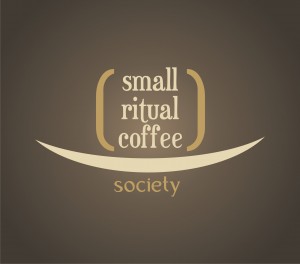 Pete and the small ritual transition team opted for a unique approach for logo selection. They chose this logo together with input from others based on the sense that it was simple, clean, had an ‘urban’ feel, is easily identifiable and will transfer easily onto a variety of mediums.

Pete tells more of the story: “This is the logo we have chosen for our coffee house, designed by a 34 yr old woman in Brazil named Karla, who works as a freelance illustrator, and graphic designer.

Two weeks ago, I began a contest on a website called 99Designs.Â  After writing a short description of what we were looking for, I launched the contest to the 27,000 designers worldwide who use this platform.

Over the next 7 days, and nearly 145 logo submissions later, the contest ended and we had our winner.Â  Entries came in from designers all over the world, from South America, Australia, Italy, the Czech Republic, etc…Â  Through a built in forum, we engaged in a process of feedback and revisions, ultimately resulting in the logo you see now.

This is certainly a unique and growing medium for fulfilling design needs and it reminds me of how we do a lot of things at Southpoint.Â  As a community, we tend to embrace expressions of truth and beauty no matter how differently they may be packaged.Â  These are traits that define us and are aspects of our identity that should be celebrated.Â

Hopefully, Small Ritual Coffee will be no different.”

Great job guys! I think this will be a great logo. Can’t wait to get my tattoo!